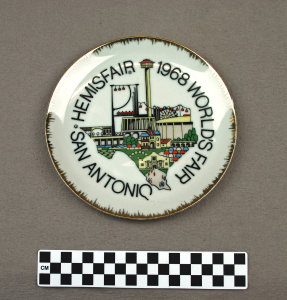 This object is a painted commemorative ceramic plate, decorated with a scene of HemisFair ’68 within the outline of the State of Texas. This plate was made to commemorate the 1968 worlds fair in San Antonio. Memorabilia items like this plate are widely available on the internet for collectors today and were mass-produced for sale and distribution during the fair.

HemisFair was name of the World’s Fair that was held for six months, from April 6, 1968 to October 6, 1968, in San Antonio, Texas. The HemisFair commemorated the 250th anniversary of the founding of San Antonio in 1718. The theme of the event was the “Confluence of Civilizations in the Americas.” This theme captured the variety of cultures, traditions, and heritages in San Antonio.

The HemisFair’68 had its beginning in February of 1958 when Jerome K. Harris introduced the idea to the San Antonio Chamber of Commerce. He explained that the fair would celebrate the cultural heritage shared by San Antonio and the nations of Latin America. Henry B. Gonzales, San Antonio Congressman, eventually endorsed this idea, and initial planning for the World’s Fair began. The project officially began in 1965 when San Antonio received their official Fair status by the Bureau International des Expositions, who governs and runs the World’s Fairs. Their objective is to bring order to exposition scheduling and to make clear the rights and responsibilities of the host city and the participants.

HemisFair welcomed over thirty nations and six million visitors. This was the first designated international exposition in the Southwestern United States. Today, a number of buildings built for HemisFair remain, including the Tower of the Americas; the State of Texas Pavilion, the largest of the fair buildings, is now the site of the UTSA Institute of Texan Cultures; and the former U.S. Pavilion complex and circular theater were converted into the Federal Courthouse.

The first World’s Fair was held in London, England in 1851 in Hyde Park. The World’s Fair is a large international exhibition that showcases an array of cultural, industrial, and scientific items, at an assigned site from three to six months. This fair includes exhibit from countries around the world, along with entertainment, food and beverages, rides, and attractions. Throughout the centuries, the World’s Fair has been held at sites around the world such as Paris, Australia, Hanoi (French Indochina), Japan, the United States, Italy, Spain, Germany, and several other countries.