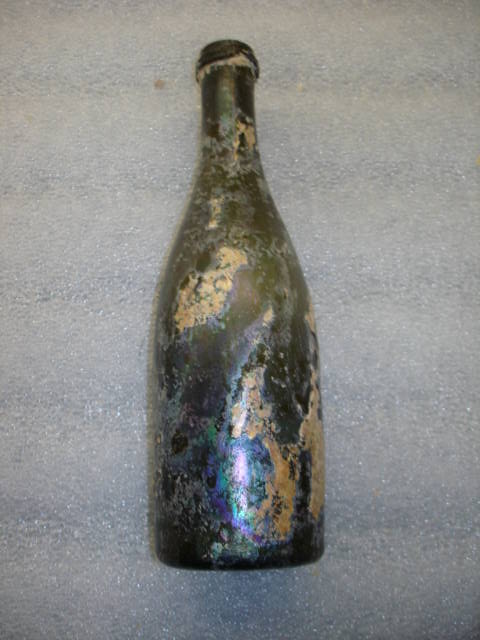 This object is a greenish-colored drinking bottle that most likely held wine or champagne. It is thought to date between 1850s and 1920s because of its lip. This particular lip has a sheared top with a tooled ring. The lip is the tip of the bottle where the liquid pours out. The tooled ring is a ring that goes around just below the lip. Since there were many variations of sheared tops and tooled rings throughout the years it can be difficult to narrow down specifically when this bottle was made. However, we know that this style became popular around the 1850s and was less common after 1920s. Around the time this type of bottle declined in production, the American alcohol industry went through a drastic change.

In the early 1800s people in the United States started speaking out against the drinking of alcohol, this was known as the Temperance Movement. At first, supporters of temperance hoped to slow down public consumption of alcohol. After the Revolutionary War the American economy experienced difficult times. Citizens went through an economic depression, the Civil War, and hard working conditions. Men who worked in manual labor jobs, where physical strength was required, were offered liqueur to help them work through the day. People began relieving stress by drinking in public. Alcohol also was considered safer to drink than water, since many water sources were contaminated with bacteria. All of these factors led to an increase in alcohol consumption, and a greater number of people suffering from alcohol addiction. Later Temperance advocates began to support the total banning of alcohol. Many people, often wives of alcoholic husbands, took a pledge to never drink an alcoholic beverage. This movement eventually led to the country’s ban on all alcohol sales and manufacture. This time period was called Prohibition and it lasted from January 1920 to February 1933.

The temperance/prohibition movement had been quite active in Texas even before it became a state in the Union. The movement gained in power and support in Texas in the 1840’s. In 1843 the Republic of Texas passed what may have been the first local option measure in North America. The “local option measure” allowed individual cities and counties to decide if they wanted to allow the sale and consumption of alcohol within their borders. In 1845 the temperance movement helped pass a law which outlawed saloons, but was largely unenforced and finally repealed in 1856. In 1895, fifty-three of the 239 counties in Texas were dry, and another seventy-nine counties were partly dry under the local option measure. In 1919 Texas voters approved a state prohibition amendment, which had already been passed by the United States Congress and was being ratified in each state.

Supporters of Prohibition hoped that the ban would increase economic and social productivity. It was thought that without alcohol, there would be no more public intoxication, less crime, and a healthier public. However, the results they hoped for did not materialize after alcohol was banned, instead prohibition led to a boom in organized crime. Many people took to crimes of “moonshining” and “bootlegging” during the ban. Moonshining is the process of making illegally distilled alcohol. Bootlegging is the illegal transportation and distribution of alcohol, whether it is produced legally or not.

During Prohibition bootlegging was the only way people could buy alcoholic beverages. Since alcohol was in high demand by many citizens, more and more people went into bootlegging as a way to make money. This is how organized crime quickly spread across the country, contributing to the rise in the now infamous criminals known as gangsters or mobsters. One of the most famous gangsters was Al Capone, also known as Scarface. He was one of the many outlaws that illegally sold alcohol. The government tried on a number of occasions to put Capone in prison for his role in bootlegging and organized crime, but had trouble successfully prosecuting him. In 1931, two years before the end of Prohibition, Capone was charged with tax evasion and violations of Prohibition. Later the Prohibition charges were dropped because witnesses feared to face Capone in court. However, he was still convicted for tax evasion and sentenced to 11 years in prison and fined $50,000. Although Capone and several other gangsters were imprisoned, the illegal sale and transportation of alcohol continued. Bootleggers and mobsters continued bootlegging alcohol until 1933 when Prohibition was repealed with the 21st amendment.