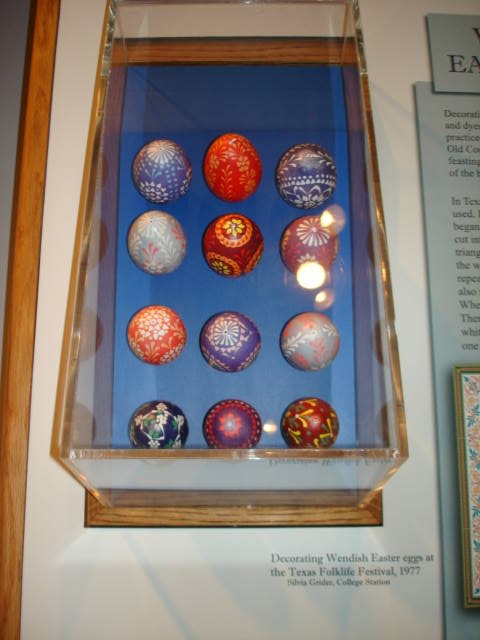 These are a set of one dozen Wendish Easter Eggs decorated in the traditional style. The eggs are colored using different colored dyes. The Wends are a Slavic people from East Germany near Bautzen and Cottbus in the upper Spree River valley, an area long known as Lusatia. They have their own language, Sorbian, which is divided into two dialects, Upper Sorbian and Lower Sorbian. The Wends never had an independent nation and were surrounded by Germans. By the 1800’s they were experiencing widespread discrimination. They had difficulty finding jobs, their properties were confiscated, they were forced to use the German language for all business, and were even given German names by the authorities. The Wends also experienced religious oppression as well as cultural. Following the Peace of Augsburg in 1555, Wends became Lutherans. However, in 1817 the Prussian government issued the Edict of Union. This edict was an effort to unify the nation by establishing one church for all. Lutherans, Calvinists, and all types of Protestants were to required to join the new Union of Evangelical Churches. The Wendish were particularly resistant to the newly unified church, believing that it was too different from their Lutheran faith. To escape this oppression many Wends chose to leave their homeland, with most immigrating to either Australia or Texas.

In December of 1854 around 500 Wends immigrated to Texas through Galveston. They ended up settling in Lee County, in the towns of Serbin and Giddings. The Wendish population of Texas spread over time and there are now sizable populations in Lee, Fayette, Williamson, Coryell, and Bell counties in Texas. After immigrating the Wends held on to many of their traditions and language for years, but overtime the community has slowly assimilated into Texas culture. There are very few speakers of Sorbian left in the world.

One tradition that has been kept alive though is the decorating of Easter Eggs. The four techniques that are most commonly used to decorate the eggs and they are: Wax Batik, Embossed, Acid, and Scratch. Wax Batik is the most common technique used by Wends here in Texas. The egg is either blown (the contents of the egg are removed through a small hole) or hard boiled. Clear wax is then dripped in a pattern on the egg, or for the more skilled decorator, the wax is applied using a feather. Once the wax is applied, the egg is dipped in a dye, the wax keeps that section of the egg from absorbing the dye. After the egg is dried more wax can be added to the design, and the egg can be dyed again. These steps can be repeated many times until the design is complete, and then the wax is removed. Embossing is similar except that most of the time a colored wax is used and is then left on the egg. For either of the Acid or Scratch techniques, the egg is dyed and then the designs are either created using Acid or the design is scratched into the egg. The eggs on display here at the UTSA Institute of Texan Cultures were decorated using the Wax Batik technique during one of the Texas Folklife Festivals that takes place here at the Institute every year.