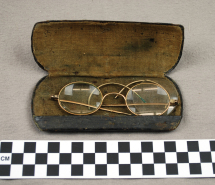 Humans have five senses: hearing, sight, touch, taste, and smell. Although all are important for the human experience, many argue that sight is the most important. This object is a pair of eyeglasses which were made around the year 1870. It is estimated that most of the U.S. population uses eyeglasses or contacts. Today with modern technology there are all kinds of options to help if ones vision starts to fail. However, the most common and the earliest form of vision assistance are eyeglasses.

Before the invention of glasses, people had to go about their lives in a blur. However, people used whatever was available to help them see. For example, in a letter written in about 100 B.C. by a Roman, he states that because he could no longer see and read for himself and had to rely on his slaves. It was also said that the philosopher Seneca read books by looking at them through a glass globe in water. The oldest known lenses were found in ancient Nineveh and were made of polished rock crystal. The reading stone, a simple type of magnifying glass, was created around 1000 A.D.

It is not known who exactly invented glasses or in what year they were invented but it is estimated that they were developed between 1268 and 1289, based on written accounts of their use. For example, in a manuscript dated 1289 it was written “I am so debilitated by age that without the glasses known as spectacles, I would not longer be able to read or write.” By the year 1306 a monk from Pisa, Italy gave a sermon in which he stated, “It is not yet twenty years since the art of making spectacles, one of the most useful arts on earth, was discovered.” By the year 1352 eyeglasses began to appear on people in paintings.

In the beginning, glasses had lenses made out of quartz and were set into bone, metal or leather. These glasses however, did not look like what we think of today. In the early days of glasses they were simply balanced on the nose of the person who wore them. This proved to be a problem because everyone’s nose is different. One invention to try to help with this issue was using ribbons that attached to the frames and looped over the ears. The modification traveled to China but the Chinese used metal weights attached to the strings. Slowly the use of eyeglasses began to spread from Italy to places like Germany, Spain and France.

By the 1700s eyeglasses were being worn in many places around the world. Vision aids began to improve and evolve. In 1780 Benjamin Franklin is credited with inventing the bifocal lens. This lens made it possible for people with multiple vision problems to only use one set of eyeglasses. There were many types of glasses that were produced besides the traditional ones we know of. The monocle was one of them, which was a circular lens used when vision needed to be corrected in one eye. Another type of eyeglass was the lorgnette, which had a handle to hold them instead of being worn.

Today although many people still wear eyeglasses, contact lenses are very popular. Leonardo Da Vinci is credited with coming up for the idea of contact lenses in 1508. However, his ideas were never really implemented. There were many people who tried to come up with a suitable contact lens that could be worn comfortably in the eye. Many failed and others used the failed ideas and perfected them. Contact lenses started out made out of glass and then as new materials like polymethyl methacrylate were developed, plastic versions were invented. By 1949 contact lenses could be worn for up to 16 hours a day and more people were interested in them, even though they were expensive. As the years have gone by contact lens have improved drastically and serve many aspects of correcting vision. Many people also wear contact lenses for cosmetic purposes.

Today many people who have trouble with their vision are opting for not wearing either glasses or contact lenses. With modern technology it is now possible to correct ones vision with a procedure called LASIK. This procedure, also known as laser eye surgery, is a surgery which corrects multiple vision problems by reshaping the eyes cornea. With this surgery many people no longer need to depend on eyeglasses or contact lenses. However, as with all surgeries there are some pros and cons to having the procedure done.

Glasses, contact lenses, and LASIK surgery are all options to help correct ones vision. However, for many people whose vision cannot be improved by any of these options, other tools must be used to replace their natural sight. These tools include canes which help them detect obstacles when trying to move from one place to another. Guide dogs are also an option to help with mobility. When it comes to things like reading, people who have severe visual impairment use braille, a writing system made up of raised dots. For other every day activities, people with visual impairment might use equipment such as calculators, or GPS devices which can speak to the user.