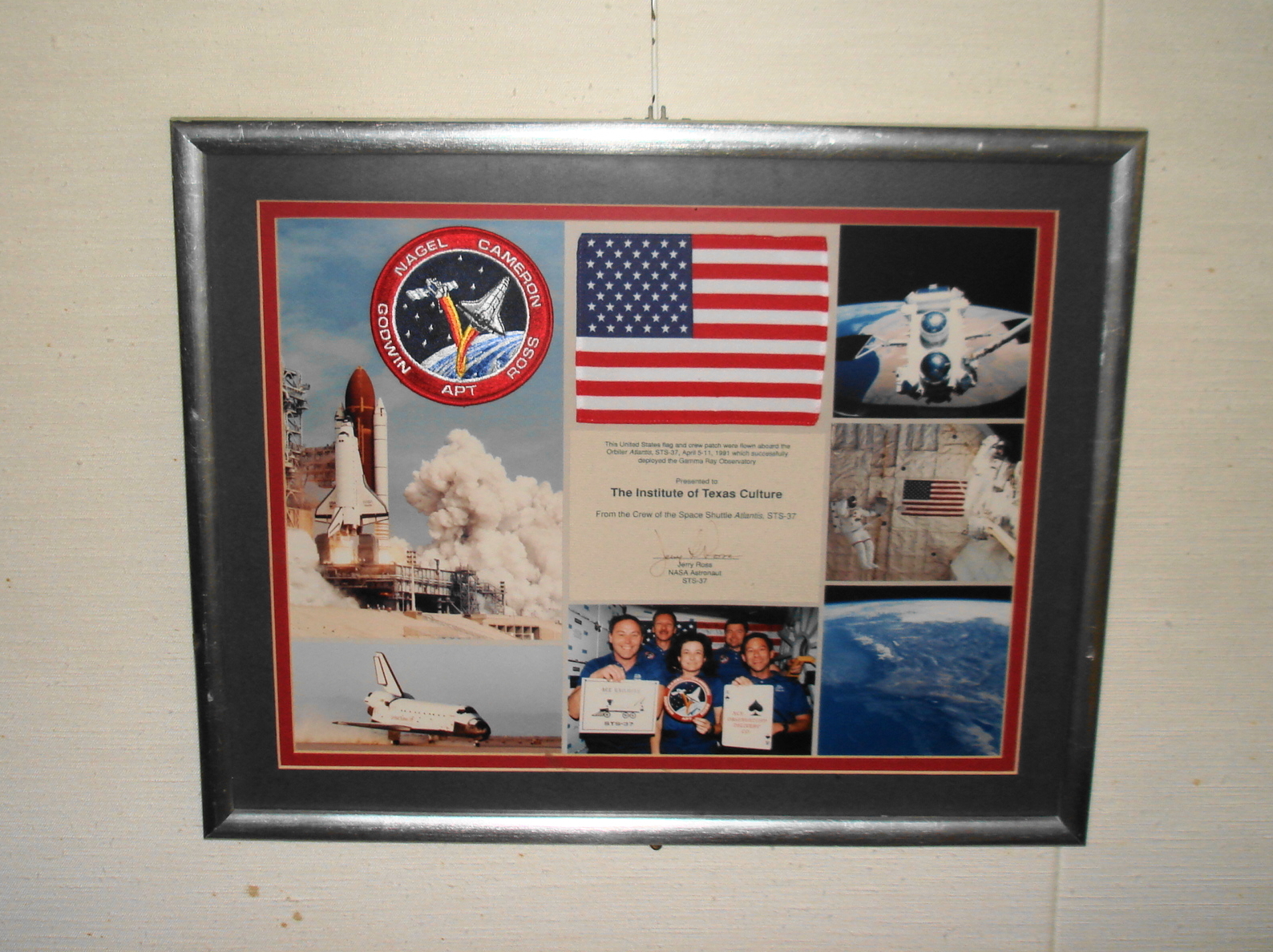 This frame contains a small US flag and crew patch, along with a certificate of authenticity verifying that these items were flown aboard the space shuttle Atlantis for the UTSA Institute of Texan Cultures on the shuttle program’s 39th flight (April 5, 1991-April 11, 1991). Flags were routinely flown on different shuttle missions for a variety of reasons such as honoring fallen veterans and police officers or for commemorative purposes. The astronauts aboard the particular flight included Steve Nagel, Kenneth Cameron, Linda Godwin, Jay Apt, and Jerry Ross. This flight launched from the Kennedy Space Center in Florida, encircled the Earth 93 times (2.4 million miles), and landed the Rogers Dry Lakebed, Runway 33, Edwards Air Force Base, California. Its purpose was to launch the Gamma Ray Observatory. The National Aeronautics and Space Administration (NASA) has had a huge influence in Texas with Mission Control and astronaut training facilities being located in Houston. Tours are offered on weekdays for those interested in learning more about how NASA operates.

Space shuttle Atlantis was NASA’s sixth and last space shuttle. Construction began on March 3, 1980 and her maiden voyage was on October 3, 1985. Atlantis’s first missions were to carry classified payloads for the U.S. Department of Defense to space. Later, it served as a vessel to launch space probes like Magellan and Galileo; it is also responsible for contributing most of the data NASA has on how various objects behave in low Earth orbit. Perhaps most notable were its pioneering journeys with the Russian space station Mir. In its later missions, Atlantis served to transport supplies to and from the space station and Hubble Telescope. It completed 33 successful flights in total (the second most of all six shuttles—Discovery had the most with 39 launches). It underwent two significant remodeling and upgrades, known as Orbiter Maintenance Down Periods. The most significant of these included installation of the drag chute, new plumbing lines and electrical connections configuring the orbiter for extended duration missions, new insulation for the main landing gear doors, improved nosewheel steering, preparations for the Mir Orbiter Docking System unit, installation of the International Space Station airlock and Orbiter Docking System, and the installation of the Multifunctional Electronic Display System (also known as the “glass cockpit”). Due to budget cuts and a shift toward exploring deep space, NASA was forced to retire its space shuttle program. Atlantis ended its final flight on July 21, 2011 as it rolled into the Kennedy Space Center Visitor Complex so generations to come may look into the past at something that has seen much more of our solar system than most people will ever get the chance to.