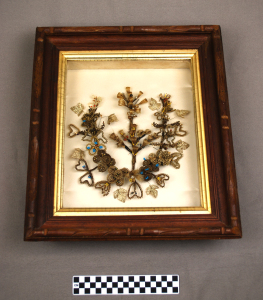 This object is a framed wreath made of human hair inside a shadow box. This hair wreath was made by Mrs. John Mueller using the hair of several different female family members. Hair used to be a popular material in jewelry and wreath designs. Hair art can be traced all the way back to the 12th century, however it is hard to determine its exact beginnings. The keeping of human remains, both hair and other parts like bone fragments, had been practiced when creating reliquaries. Reliquaries are religious objects that contain, or claim to contain, the remains of important religious figures or important items. The practice of making and collecting hair art gained popularity during the Victorian Age.

The Victorian Age took place from the early 1800s to the early 1900s. It was during this time that hair work became not only a tradition but a fashion style. Most hair works were made as memorial tokens of those who had died. However, hair from living people was also used to make mementos that represented friendship and family connections. Typically, hair art and jewelry used the hair of family members, both female and male; but close friends would also exchange hair swatches and put them in autograph books.

For families, hair works collections could be used as a form of genealogy. Genealogy is the study of family and the tracing of their lineages and history. Hair works, especially wreaths, were made to be added onto as the family tree grew. Works were also known to have the person’s name as well as their birth and death dates written alongside the different hair samples. Unlike regular family trees, hair works were much more intimate. Other works include necklaces and bracelets woven out of the hair and watch fobs, brooches, and rings with the hair mounted on top.

Today, it is easy to view hair works and jewelry as something strange. However, for people who lived during the Victorian Era, hair work was an expression of love. With commercialism beginning to rise during this time, having a piece of art made from something as personal as someone’s hair was a sentimental and sincere gift. Hair works are still around today and can usually be found inside museums. Today we see a similar sentiment with the various ways people now display ashes of their loved ones. Some examples of this include urns for mantles, necklaces, and even transforming the ashes into man-made diamonds.