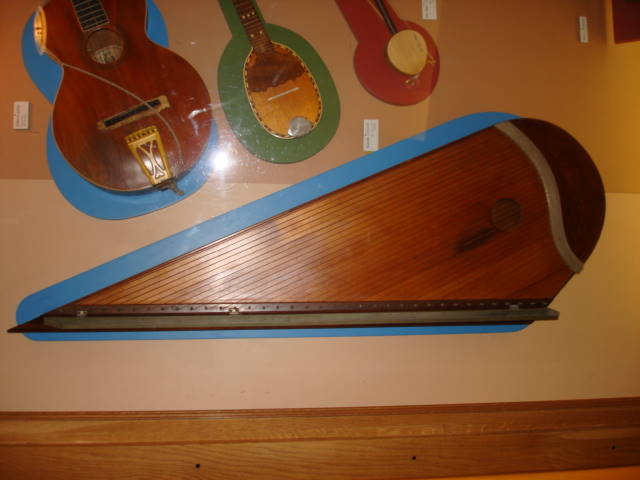 This is a Finnish stringed instrument called a kantele, hand-carved by Finnish-American August Elo in 1910. The kantele is an ancient Finnish instrument, and became a national folk symbol in Finland by the 19th century. The kantele originally had 5 strings and played with ancient folk songs, poems, and dances. The kantele is played by plucking the strings with the finger-tips when placed on a table or in the player’s lap. The exact age of kantele instrument is unclear, but is thought to be at least a thousand years old.

In the Finnish epic poem Kalevala, one of the tales describes how a shaman named Väinämöinen created the first kantele. The Kaleaela is a compilation of poems, tales, and ballads, including the tale of the shaman who created the first kantele. The Kalevala, started as an epic poem passed from generation to generation as an oral tradition and has became a national folk symbol for Finland, now widely published as a book. Its first publication was in 1835, by Elias Lonnrot, who arranged and compiled the poems in the format used today in publications. The Kalevala was considered the National Epic of Finland. For centuries, the Finns used the kantele to play traditional folk songs and poems based on this epic poem, long before it was published; only knowing the creation story of the kantele through the songs and stories they learned from their communities.

By the 18th and 19th centuries, as European music was introduced to Finland, the strings on the kantele were expanded up to 30 strings in order to play the newly introduced European style music. This kantele at the UTSA Institute of Texan Cultures has 36 strings, reflecting the more modern version of the traditional kantele. Even though the 19th century was the time of growing national pride in Finland, the country was not immune to outside influence. As the kantele was used to play traditional folk songs, it became less significant in Finnish culture as traditional Finnish epic poems and tales were replaced with mainland European music and composers.

Many Finnish immigrants came to the United States between 1880 and World War I, due to the oppression of Russian policies, and a lack of economic opportunities. As Finnish immigrants came to North America, musicians brought the kantele with them, including to Texas as they settled there in the early 20th century. This instrument was made in Texas, around 1910, indicating that kantele were still important to Finnish immigrants, even into the 20th century. Traditional Finnish music was still active in Finnish communities and the kantele was used in religious gatherings and church services. However, interest in traditional folk musical instruments declined amongst the Finnish community world-wide until a revival in the 1960s. For Finnish-American communities in the late 20thcentury, the kantele held special meaning to them, as a symbol of their heritage. The community was eager to embrace the kantele and other traditional folk music, that had been largely missing from the community for years. Folk music festivals were established, helping in the re-introduction of the kantele and traditional folk music. The revival of Finnish folk music was also supported by the Finnish American Reporter, a Finnish-American newspaper that was created for anyone of Finnish descent across the world, with articles about anything related to Finland. The articles published about Finnish culture, is one way in which Finnish-Americans and Finnish-Texans can learn about traditional Finnish folk music. As awareness of the kantele grew during the 1980s-90s, folk bands that perform with traditional folk instruments started using the kantele as well. With new research on traditional Finnish music, and growing public awareness, Finnish-Americans are learning to play the kantele, bringing back part of their cultural heritage.