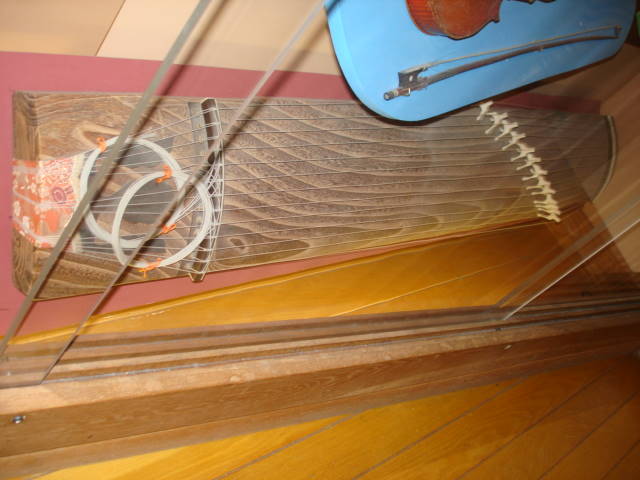 This instrument is called a koto, a Japanese stringed instrument. The koto originally came from China to Japan between the 7th and 8th centuries. Overtime, it became a traditional Japanese musical instrument and has been used in various ways for musical performances. The exact age of this particular koto is unknown, but it may have arrived in Texas by one of the many Japanese immigrants who came to Texas in the early 20th century.

The koto was at first used for solo performances at the Japanese Imperial Court. Later the instrument could also be performed in noble courts, and eventually it was added into orchestra performances. Young women and girls would learn how to play the koto as part of their education, as a sign of high culture. During the 1600s, Yatsuhashi Kengyô, a skilled koto musician, is is believed to have introduced koto music to the Japanese public. Following this introduction, two schools, Ikuta school and the Yamada school, developed and taught this instrument to the public. These schools differed not only in playing technique but also in how they used the koto to create music. The Yamada school, heavily influenced by Western music, focused on using the instrument as an accompaniment to elaborate narrative song performances. Meanwhile the Ikuta school preferred to highlight instrument itself, performing short songs with long koto solos in between each.

In Japan, blind musicians were considered masters of the musical arts and were given high honors in Japanese society. These blind musicians, called biwa hoshi, were known for using the lute or biwa, but also used the koto for their performances. Koto masters were given the honorary title Kengyô, and were professional teachers and music instructors. However, this honor was reserved for males, as women could not become professional instructors even though learning how to play the koto was part of their formal education.