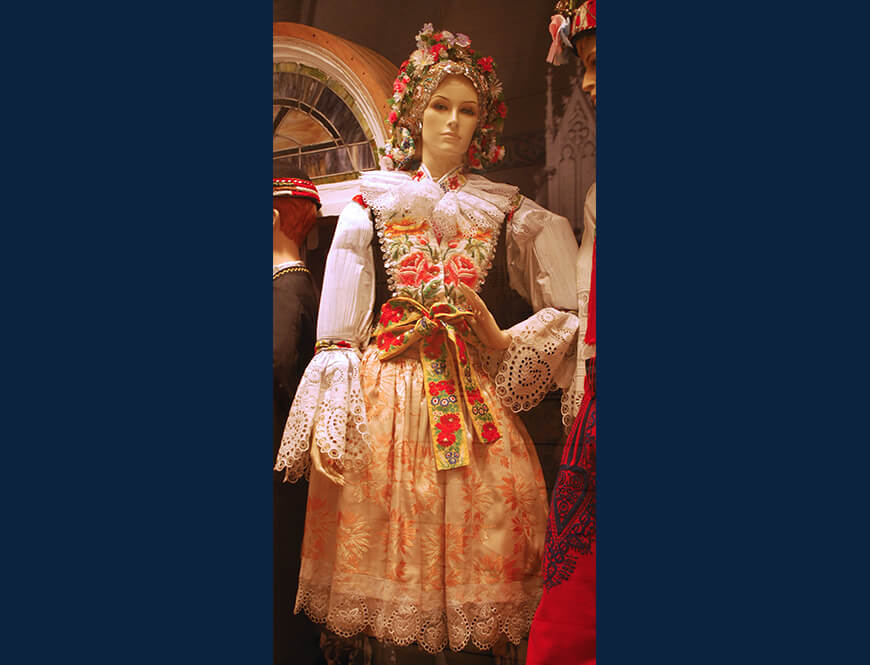 This Kroj costume consists of a head piece, vest, blouse, collar, apron, sash, petticoats and boots. The donor of this particular example purchased the costume in the village of Hluk (near the town of Uhersky Brod, in the Moravian-Slovak border area). The fabrics used and form of kroje found in the Czech/Slovak area are very diverse, and vary from region-to-region and village-to-village. Additionally, specific styles were used for different occasions; some for weddings, others for dances, etc. Various kroj accessories were also used to show if the wearer was married or single. Both men and women traditionally wear kroje in Czech culture, though a woman’s is far more intricate and detailed. Czech people wear Kroje for important days in their lives such as weddings, christenings, and funerals. Traditionally, a young girl would design and make her own kroj with the assistance of her mother and grandmother. Today, kroje are mostly worn as costumes at folk festivals.

Traditional Czech weddings have many similarities that we see today in western culture, but there are some significant differences. In years past, it was common that the groom and two other men pass out the wedding invitations by going door to door around their village. This could be done anywhere from several days before the wedding up until the actual day of. Accompanied with the invitation was a pastry, called a kolache, made by the bride and her relatives. These included at least three different types of fillings and showcased the women’s culinary skills. Other unique Czech wedding traditions include breaking a plate at the reception, and the bride and groom sharing soup together (instead of cake), and many others.

Czechs first began immigrating to Texas in the 1800s and by the time of the Civil War there were about 700 Czech people living in settlements in Austin, Fayette, Lavaca, Washington, and Fayette counties. Czech immigration to Texas and the United States peaked in the early 1900s, leading up to WWI, when political instabilities, religious intolerance and military conscription drove many from their homelands. Today large Czech communities can still be found in central Texas, and a number of Czech heritage festivals and gatherings are hosted in Texas throughout the year where many examples of kroje can be seen.