Bicycle or Carriage Lamp from 1900 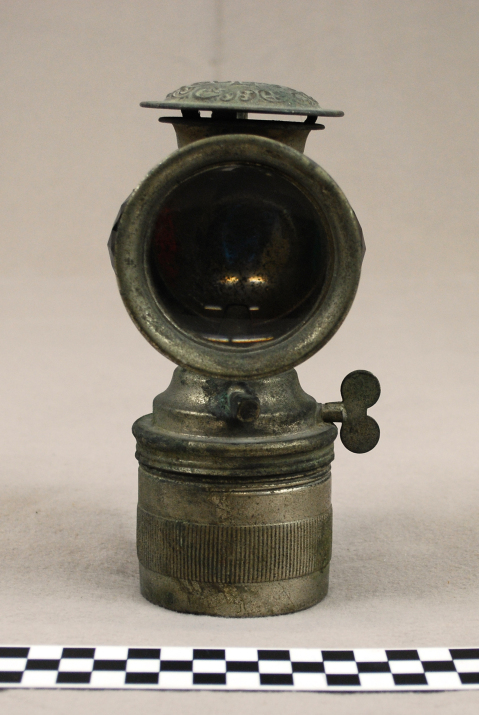 This object is a bicycle or possibly a carriage lamp from 1900. It was manufactured by the Badger Brass MFG Company from Kenosha, Wisconsin. Known as a carbide lamp, or acetylene gas lamp, it was used to for buildings, lighthouses, early car and bicycle headlights, and as lamps for miners. This lamp was an early chemical lamp that relied on burning acetylene, a gas substance, for light.

According to archaeological finds, the first known personal lamp is dated at 70,000 years old and was simply a bowl-shaped rock that would have been filled with a combustible material like animal fat or plant oil. Later lamps were made using pottery and wicks, which led to more control over how long the light could last. The Ancient Greeks used this type of lamp and the word lamp actually comes from the Greek word lampas which meant torch. It wasn’t until the 1800s that lamps were radically changed from burning fuel to using electricity.

For small items, like the bike lamp, electricity was first used in 1801 by chemist Sir Humphrey Davy who created the Carbon-Arc Lamp. It wasn’t until Sir Joseph Swan of England and Thomas Edison of America separately developed the incandescent light bulb in the late 1800s that electric lights became widely available. By 1880, Edison had patented his invention and the product boomed.

Using electricity for large-scale operations, like lighting cities and manufacturing, began in 1895 when the water power of Niagara Falls was used to generate electricity for a nearby manufacturer and the city of Buffalo, New York. With much more innovation needed for electricity to become more widespread, many earlier forms of lighting were still in use by 1900. By 1930 most large cities had electricity with only small, rural towns still relying on older forms for lighting and cooking. Today we use electricity everywhere we go and can carry light around with us because of batteries which we use in objects like flashlights.