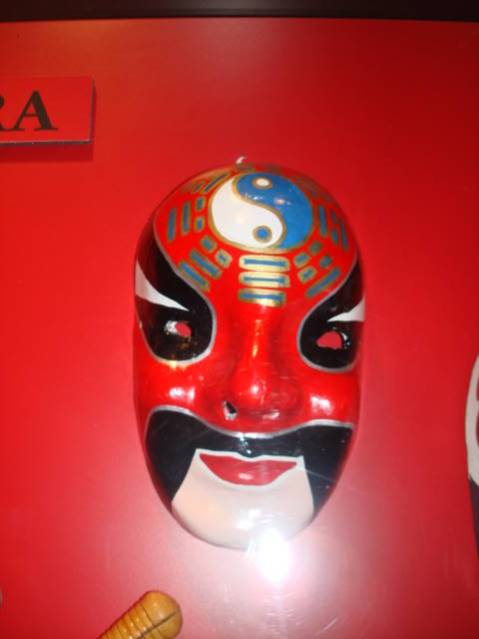 This is a Chinese Opera mask depicting Jian Wei, a character who appeared in the The Romance of the Three Kingdoms. This traditional Chinese drama combines historic events, and legends, from the third century AD and the civil wars after the fall of the Han Dynasty. The wars between the Shu, Wu, and Wei kingdoms spawned stories of violence, betrayal, heroism, and romance.

Jiang Wei is represented with a red, white and black three tiled face with a taijitu, or yin yang, symbol on his forehead. The colors and symbols on the face of an opera character give the audience insight to the personality of the character. Red represents loyalty and courage in Chinese culture. Because his face is mostly red, it suggests an overall positive character. The taijitu on his head tells the audience that he is a Taoist master and has an immense knowledge of the universe. Jiang Wei was a historical figure who was originally a general for the Wei kingdom but his authority was not respected so he became a general of the opposing kingdom of Shu. He later became the successor to the famed Zhang Liang, however, he betrayed the Shu kingdom by manipulating them, allowing the Wei kingdom to overthrow the Shu.

Masks such as these have several purposes, they can be used for ceremonies, protection, festivals, and theater. In this case, the mask would be worn by an opera performer, today actors typically wear face paint rather than masks. Using paint is more difficult and requires skill, but it allows the actor to better convey emotion.

In the Chinese Opera there are four different types of roles. The first is the female role or dan usually young a maiden, elderly woman, or warrior woman. Second is the male role or sheng, which refers to a young man, elderly man, or combat warrior. Then there’s the clowns or chou which can be either male or female, the clowns are comical characters that can act as the villain or simply provide comic relief. Finally there’s the painted face roles, called jing, which are powerful male roles. The painted face characters usually include generals, villains, gods, supernatural beings, or other powerful characters. The singing style is different for the painted face roles, it requires a deep nasal voice. Their costumes are big and demand attention, with large shoulder pads and heavy fabric these characters take up a lot of space.

Tales like these have been an important part of Chinese literature for centuries with the opera being a form of historical education for many common, or even illiterate, Chinese peoples. However exaggerated and whimsical the operas appear, many of the  stories contain historical fact in the events and characters. The legends told in the Chinese Opera have influenced the identity of the Chinese culture and people. During the mid-nineteenth century, China was in increasing contact with Europe though many western explorers. Europeans journeyed to China to learn about and study the Chinese culture, spread religion, or secure trade routes. The Chinese identity was challenged by the sudden and immense exposure to western society. The traditional tales performed in the opera encouraged and reinforced the Chinese identity. On an international level Chinese Americans brought the Peking Opera to America when there was an increase in immigration in due to the 1849 gold rush. The Chinese have used opera to continue and spread their legends and history. Today the Chinese Opera can be found in countries across the world and has influenced modern media. Chinese themes, stories, and characters play parts in video games like Dynasty Warriors, novels like Journey to the West, comic books, and some have been adapted into full-length feature films.