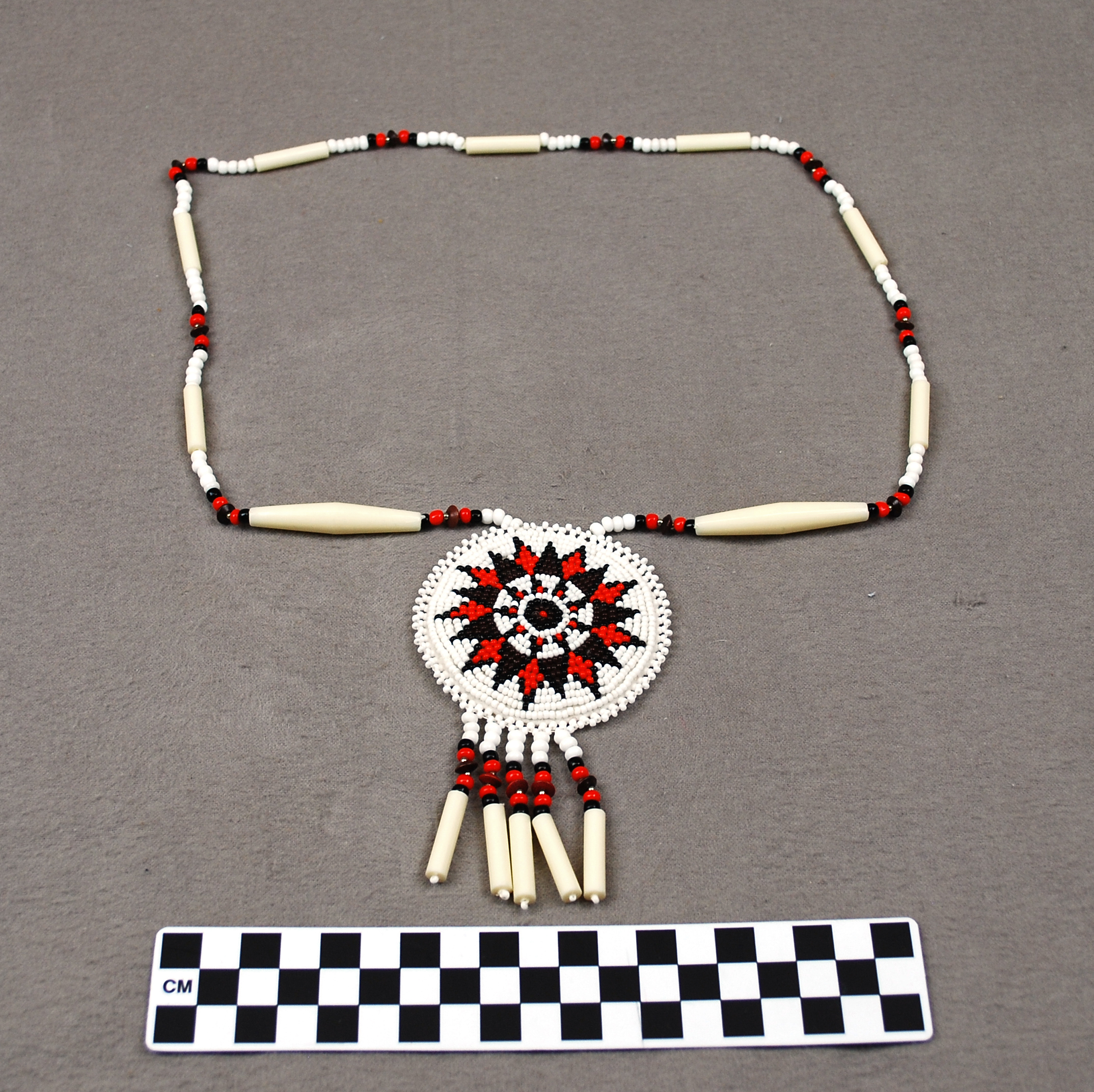 This item is a necklace made by a member of the Alabama-Coushatta tribe of East Texas. It is made of multi-colored glass beads, plastic “hairpipe” beads, and leather. The Alabama and Coushatta are actually two separate tribes, who came together after Europeans forced them out of their homelands. Even before they officially came together, the Alabama and Coushatta were closely related through intermarriage and shared customs. While the native language of each tribe is different; they developed from the same root language. Alabama and Coushatta are called Alibamu and Koasati in their own languages. Alibamu derives from the words for “vegetation gatherers” and “Koasati” is thought to contain the words for “cane” and “reed,” important plants for the Native Americans.

The Alibamu and Koasati were farmers who heavily depended on crops. To support their agricultural life, both tribes and other Native Americans lived near rivers, lakes, and streams. Their main crops included maize, squash, and beans. They also hunted and gathered wild vegetation, which is more efficient near water. Because they lived near the coast, the Koasati had contact with Europeans early on. Their first encounter with Europeans was when Hernando de Soto and his men passed through Koasati territory while following along rivers and streams.

De Soto was a Spanish Conquistador who arrived off the coast of Florida in 1539 with over 600 men (including priests and slaves) and nearly 250 horses. Their goals were to explore the New World, discover gold, and gather slaves. For three years they traveled across the American Southeast. After traveling 1,600 miles they finally reached the Panuco River in Mexico. During the expedition the explorers documented their adventures and experiences with the natives. These documents are still read today and help scientists better understand Native American lifestyle and the historic territories of some tribes. They also give eye witness accounts of certain ceremonies and architecture, helping us link together different American Indian cultures.

De Soto and his crew came across both the Alibamu and the Koasati during the expedition. They actually were welcomed as guests by the Koasati upon their first encounter. After some of De Soto’s men stole the tribe’s maize, the Koasati attacked the Spaniards. Because De Soto had no back up during the attack he pretended to be on the Koasati’s side. He supposedly beat his own men to make it seem like he was upset with their actions. The chief believed his trick and stopped the attack. De Soto offered to take a walk with the chief and some council members to apologize for the theft. Once De Soto had the Koasati men alone he kidnapped the Native Americans and ordered that his men be appointed a guide for their travels.

After the De Soto expedition Europeans kept coming back, eventually forcing Native Americans to migrate. Later on Europeans began to settle America, further pushing out tribes. Ultimately, the Alibamu and the Koasati began to move westward. Unfortunately, the warfare with the Europeans and the introduction of European diseases killed many of the Native Americans. In fact, after De Soto and other early expeditions, 80% to 90% of Native Americans in some areas of North America were killed by European diseases alone. Due to the extreme conditions, many new alliances were formed and some tribes permanently merged. This is how the Alibamu and Koasati became the Alabama-Coushatta tribe. They were eventually granted land in Texas where they built a reservation called the Alabama-Coushatta Indian Reservation, outside of Livingston. The Alabama-Coushatta is one of only three remaining Native American tribes in the state of Texas.