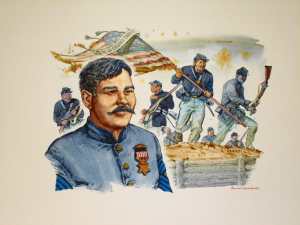 During the American Civil War there was an estimated of 4 million slaves in the United States and 500,000 free African Americans. Though many African Americans wanted to serve in the army they simply were not allowed. It was not until 1863 when the Emancipation Proclamation was issued that they would be welcomed. This object is a painting entitled “Milton Holland and Medal of Honor, 1864” painted by Bruce Marshall. Milton M. Holland was an African-American soldier who served during the Civil War.

When the war broke out people like Frederick Douglass believed that if African Americans fought in the war, the Union could win and it would be a step in the right direction for equal rights. However, President Lincoln worried that if African Americans were allowed to fight the border states would secede. By 1862 the number of white volunteers started dwindling and the war was nowhere near finished Lincoln began to reconsider his decision about letting African Americans fight in the war. The first step was the creation of the Second Confiscation and Militia Act which was signed in 1862. This act allowed the president to “to employ as many persons of African descent as he may deem necessary and proper for the suppression of this rebellion…in such manner as he may judge best for the public welfare.”

With this many African Americans began forming infantry units. The signing of the Emancipation Proclamation on January 1, 1863 specifically called freed slaves to join the Union. The first black regiment to be raised in the North was the 54th Massachusetts Infantry Regiment after a call was put by the Governor. It was this same year that Milton M. Holland joined the army. Holland was born in Austin, TX to a slave woman and Bird Holland, a white slave owner who later served as a solider in the Confederacy. In the 1850s his father purchased Milton’s freedom, along with his two brothers, and sent them to school in Ohio. Holland worked as a shoemaker for the Union army quartermaster at the beginning of the war because he was too young to enlist. Once able to join, he became part of the 5th United States Colored Troops.

Holland fought in the Battle of the Crater, during the Petersburg campaign and at Fort Fisher and rose to the rank of regimental sergeant major. After all the white commanding officers were either wounded or killed in action at Chaffin’s Farm and New Market Heights, in 1864, it was Holland who assumed command and led the troops in battle. While he was leading, Holland was wounded and this earned him the Congressional Medal of Honor. Holland was the first African-American from Texas to receive it. Holland was promoted to captain but the commission was refused by the War Department because of his race.

After the war Holland lived in Washington, D.C. He worked in the Auditor Department of the United States. Holland also opened the Alpha Insurance Company which was one of the first African-American owned insurance companies in D.C. Holland died in 1910 and is buried at Arlington National Cemetery.