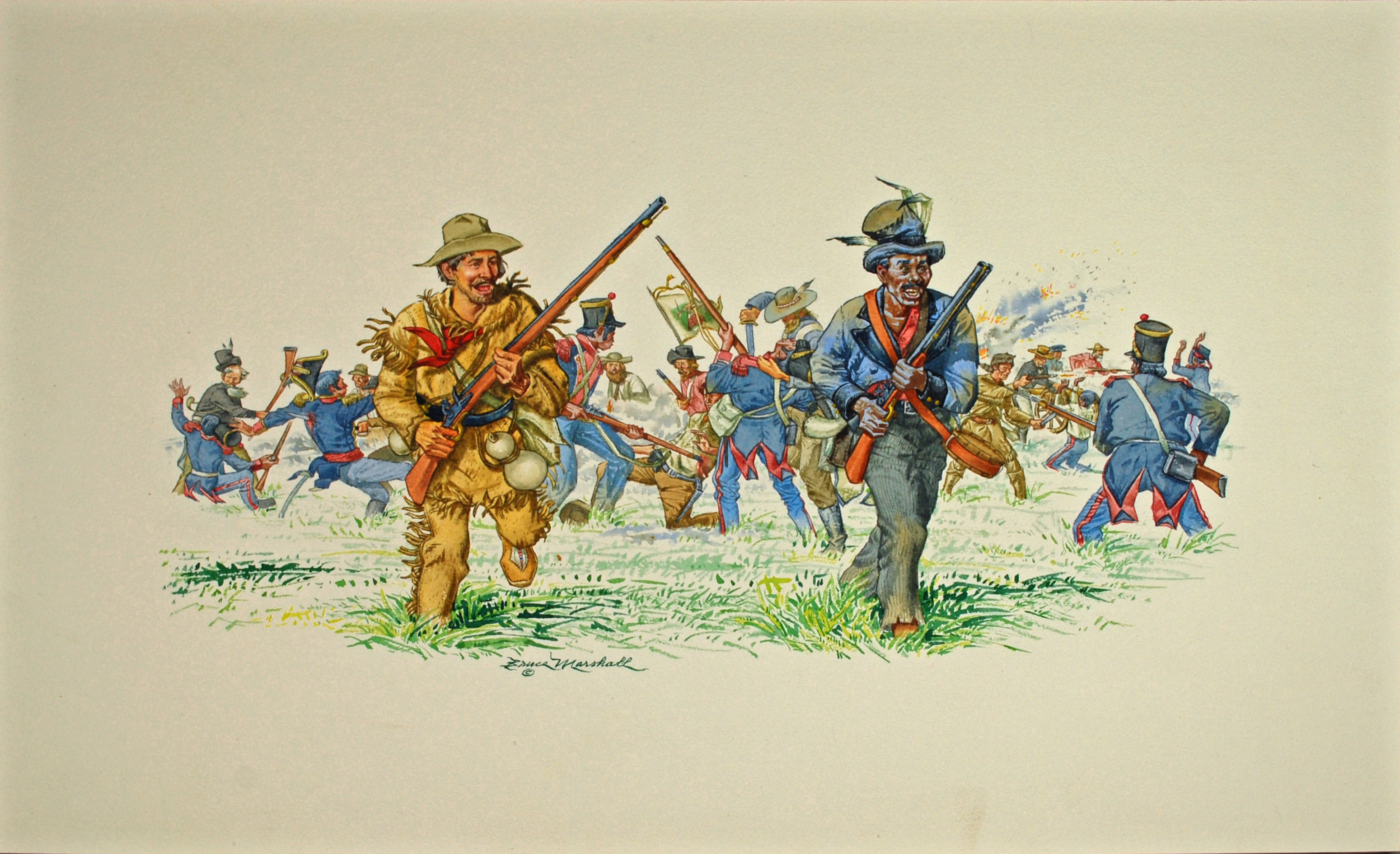 The watercolor painting is by Bruce Marshall and titled “Prospero Bernardi at San Jacinto, 1836.” Bruce Marshall has done several watercolor paintings that depict different events and people from Texas History. He is an award winning artist and writer that is well known for his work as a Texas historian and his attention to detail in his paintings. This particular painting depicts Prospero Bernardi, an Italian who fought in the Texas Revolution, and an unidentified African American at the Battle of San Jacinto.

Prospero Bernardi was born in Italy in 1794 and arrived in Texas on January 28, 1836 as part of a volunteer group that had been raised in New Orleans. He joined the Texas Army on February 13, 1836 and fought bravely in the Battle of San Jacinto. During that battle he was seriously injured and was medically discharged in January or February of 1837. He received a bounty grant and a first-class headright grant for his military service, but he gave both of these land grants away. By 1838 it was unclear as to where Bernardi was, or if he was still alive. In February of that year two former fellow soldiers testified that they understood he had died. There is a bust of Bernardi at the Hall of State, located in Dallas’ Fair Park, commissioned for the Texas Centennial Exposition. The bust is to honor not just Bernardi, but all Italians who are a part of Texas History. Though we don’t know much about Bernardi before or after the Texas Revolution, he is still an important piece to Texas History.

He was not the only Italian who fought in the Texas Revolution, he is just one of the few that we have record of. Italians are the 6th largest ethnic group to make up Texas. Though there were Italians in Texas before the Revolution, during and after, their major immigration came during the 1880’s. Many of these immigrants were farmers, and sought out farm lands in three main areas: the Brazos Valley, mainland Galveston County, and the Red River Valley. Italians immigrants to Texas eventually found work in a number of different fields. As farmers, some started vineyards, while others worked in the mines, on the railroads, or made bricks. Today Italian Texans are an intricate part of what makes Texas what it is culturally, their dances, food, and churches are all part of Texas culture.