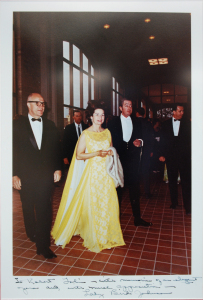 Born in Karnack, Texas on December 22. 1912, Lady Bird Johnson’s given name was Claudia Alta Taylor. Her mother passed away by the time Claudia was five. Sometime after the death of her mother her nursemaid, Alice Tittle, gave Claudia the nickname ‘Lady Bird’, which she went by for the rest of her life. After graduating High School in 1928, Lady Bird attended St. Mary’s Episcopal School for Girls in Dallas. She obtained two bachelors degrees between 1933 & 1934: one in history and one in journalism. She met Lyndon Baines Johnson in 1934 and, after a swift engagement, the couple married in November of the same year.

Shortly after their marriage, her husband Lyndon ran for political office. After Lyndon won congressional office, the couple moved to Washington D.C. When the United States entered World War II, Lyndon enlisted in the navy. While he was away, Lady Bird managed his office. Two years later, Lady Bird purchased the KTBC radio station in Austin, which eventually grew into a large-scale media company called the LBJ Holding Company. After Lyndon returned from the war, his career advanced to the U.S. Senate and by 1960 he served as Vice President of the United States alongside John F. Kennedy. While President Kennedy’s wife Jacqueline was pregnant, Lady Bird stood in for her at official events. Tragically, President Kennedy was assassinated during his visit to Dallas, Texas on November 22, 1963. Shortly after, Lyndon B. Johnson was sworn in as the 36th President of the United States and Lady Bird became First Lady.

As First Lady of the United States, Lady Bird Johnson worked on several campaigns to benefit the country. She headed the Society for a More Beautiful National Capital planting flowers in Washington D.C. Lady Bird also started a series of Women Doers Luncheons to commemorate the contributions of women. She traveled to eight different southern states to promote the Civil Rights Act of 1964, the campaign came to be known as the Lady Bird Special. Lady Bird also endorsed the Highway Beautification Act of 1965, and was the honorary chairman of the National Head Start Program which sought to help disadvantaged children prepare for school.

As a native Texan, Lady Bird Johnson also has special ties to San Antonio. In April of 1968, as First Lady of the United States, Lady Bird Johnson officially opened the HemisFair ’68. This would be about the time the photograph was taken. At the end of President Lyndon B. Johnson’s term in 1969, the couple returned to Texas. Lady Bird went on to write a book titled White House Diary before her husband died in 1973.

Lady Bird was just as active outside of the White House as in. She lent her assistance to the Town Lake Beautification Project which was eventually renamed Lady Bird Lake. Lady Bird served on the University of Texas System board of regents, co-founded the National Wildflower Research Center, and served as trustee of the National Geographic Society. In recognition for her efforts, Lady Bird received the Presidential Medal of Freedom from U.S. President Gerald Ford in 1977 and the Congressional Gold Medal presented by Ronald Reagan in 1988. Lady Bird Johnson passed away in July of 2007 at her home in Texas, where she was buried in the family cemetery at LBJ Ranch. For much of her life, she had a great appreciation for nature that translated into a passion for conservation. Both as First Lady and as a private citizen, Lady Bird dedicated her life to the beautification and social improvements of her country. She was an excellent humanitarian, Texas is proud to call one of their own.