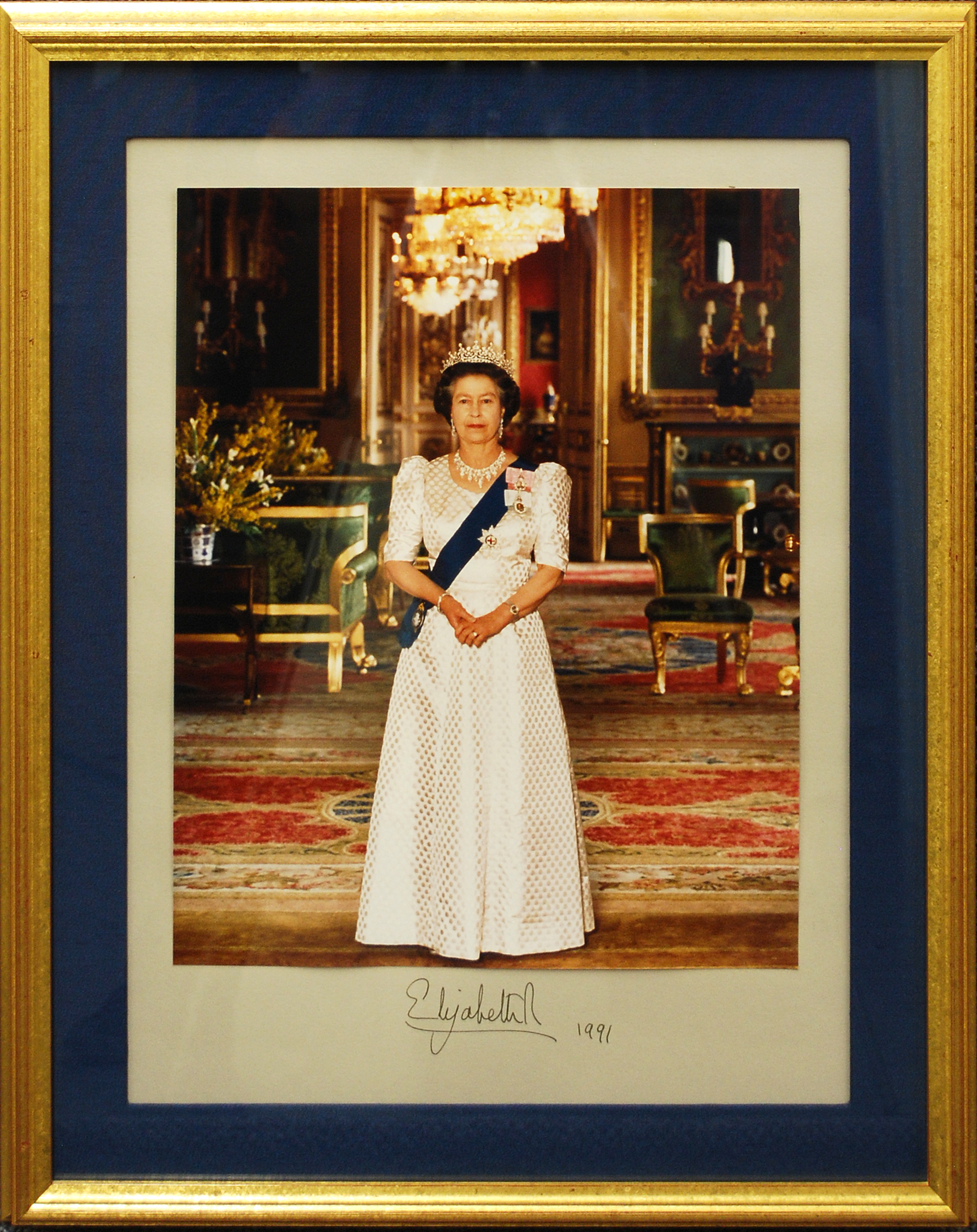 The objects shown above are a photo of Queen Elizabeth II, Prince Philip, and a letter from the Queen’s staff to the UTSA Institute of Texan Cultures. The photos and letter were sent as a thank you from Her Majesty for her tour of the Institute of Texan Cultures and for a copy of the book “English Texans.” The Queen visited the Institute during her May 14-17, 1991 tour of the United States, which included San Antonio and several other Texas cities. The Queen has visited the United States five times since she came to the throne. This was the first time that a British Monarch had set foot on Texas soil.

Queen Elizabeth II has many official titles. She is the Queen of England and Head of State for the United Kingdom, along with fifteen other Commonwealth countries. The United Kingdom includes England, Scotland, Wales, and Northern Ireland. The Commonwealth includes more than 50 countries which have either been part of the old British Empire or were ruled over at one time by Britain. The Queen is the Sovereign of only 15 of these countries, but she is the recognized as the Head of the Commonwealth by all member nations. She was born in 1926 and became Queen of England when she was 25 years old. Queen Elizabeth II and Prince Philip were married on November 20, 1947 and have four children, eight grandchildren, and several great-grandchildren.

Great Britain has a constitutional monarchy. This type of monarchy is different than an absolute monarchy in several ways, the most important difference is that the monarch does not have the right to make and pass legislation. Legislation is left to an elected Parliament and the Prime Minister, who is chosen from the majority party in Parliament. The monarch has many important duties both ceremonial and official, focusing on national identity, providing stability in times of change, recognizing excellence, and encouraging voluntary service.

The position of the monarch is usually hereditary and there is a specific line of succession, usually associated with birth sequence. In many countries, the title passes to the eldest son born to the king and queen, this type of succession is known as primogeniture. In this type of succession daughters can only take the throne if the king and queen didn’t have any sons. This was the case with Queen Elizabeth II, who only has a younger sister. Primogeniture succession was only recently changed in the Commonwealth. The current line of succession is The Prince of Wales (Charles), his son The Duke of Cambridge (William), and then his son Prince George of Cambridge. Titles change as one is born, married, and then crowned.