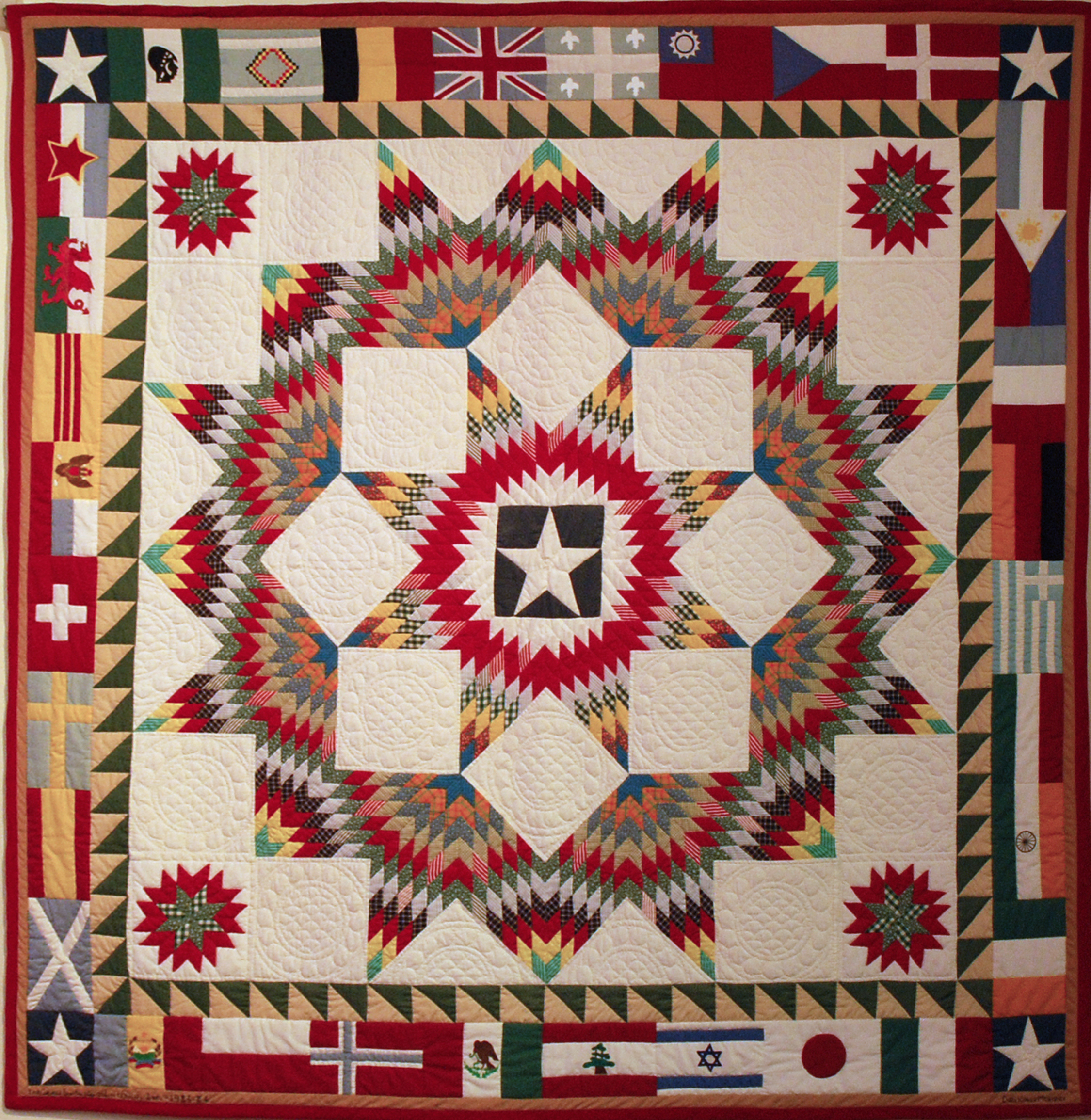 The first Texas Folklife Festival was held at the UTSA Institute of Texan Cultures in September of 1972. The event was modeled after the Smithsonian Folklife Festival, held in Washington, D.C. In 2015, the Texas Folklife Festival, will be celebrating 43 years of cultural celebration in Texas! Each year more than 40 different cultural groups from around Texas come together to celebrate their culture and heritage through food, dancing, crafts and music. To commemorate the festival’s success, the Texas Folklife Festival periodically issues a commemorative poster for the event. Artist’s from around the state submit their designs for the poster and an image is chosen by the UTSA Institute of Texan Culture’s Director and staff to represent the festival that year. In 1983, the design selected was by San Antonio artist and illustrator, Chris Moroney. The painting showed a beautiful and elaborate star quilt, with a border of national flags representing the many cultures featured at the festival and in the Institute’s many exhibits.

This quilt, now a part of the permanent collection at ITC, was made to replicate the poster. After the image was chosen for the poster, the artist contacted the Greater San Antonio Quilt Guild, with the idea of converting his image into an actual quilt. The quilters and staff at the ITC were so excited by the idea they decided to turn the making of the quilt into a Folklife Festival event in itself. The broken star pattern that forms the center of the quilt was set up in a quilting frame on the festival grounds and visitors were encouraged to help with the quilting. Members of the Greater San Antonio Quilt Guild were on hand to assist the visitors with the design, and demonstrate how to quilt. By all accounts, quilting the Texas Folklife Festival quilt was a hugely popular activity at the festival, though the guests weren’t able to completely finish the quilt by the end of the event. Luckily the Greater San Antonio Quilt Guild members were able to complete the quilting and add the flag border, in time for the finished quilt to be displayed at the 1984 Texas Folklife Festival. This quilt has been on display at the ITC many times since, and can be seen today on the exhibit floor, hanging outside the Texas Art Quilts and Modern Masterpieces exhibit.