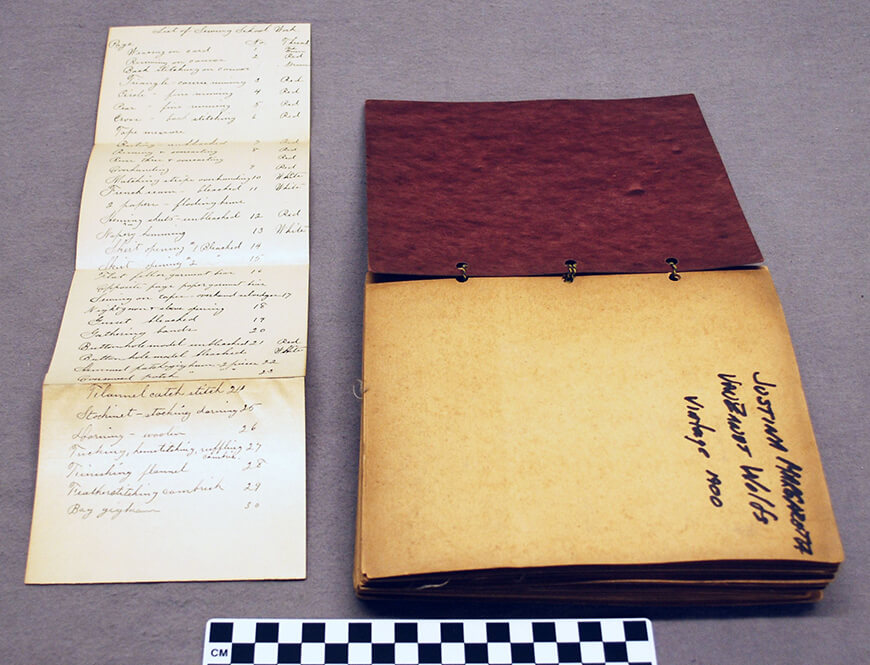 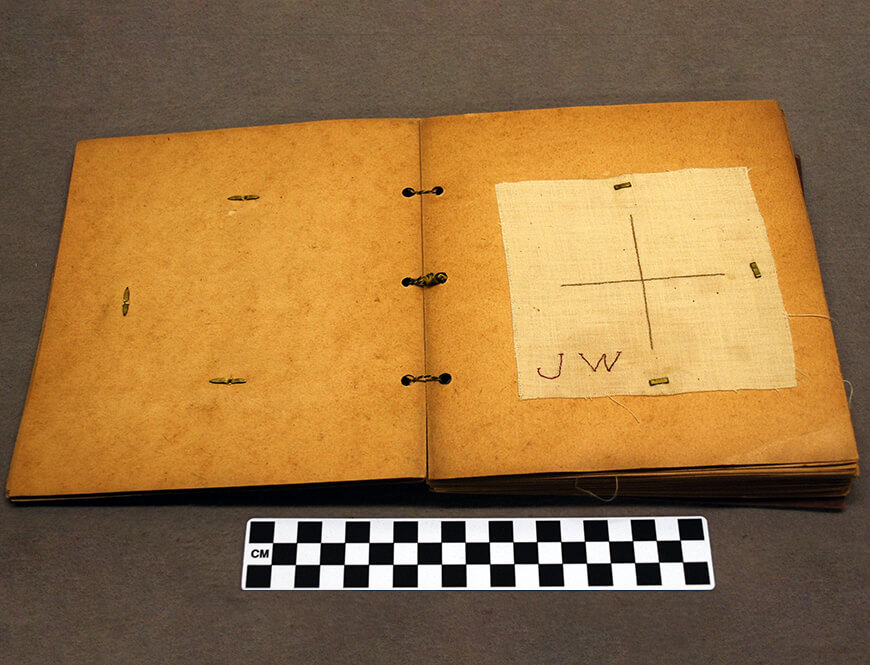 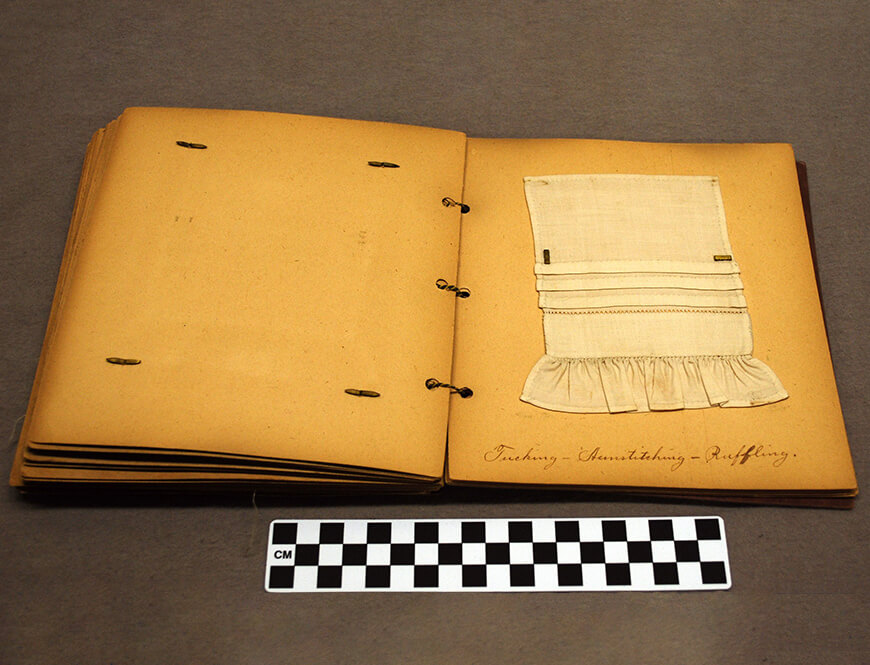 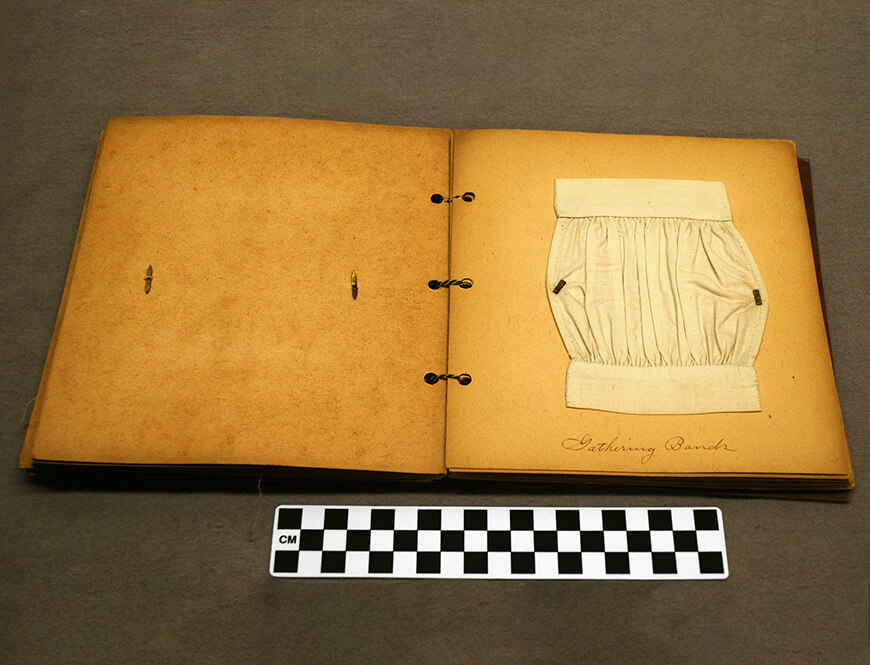 The origin of samplers dates back to the 16th century. When women saw a stitch or pattern they liked, they were stitched on a narrow band, so they had a way of saving them. By the 17th century, samplers became somewhat more organized with a simple border, with increasing use of alphabets and religious inscriptions. By the 18th, 19th and 20th centuries, samplers were used to demonstrate skill more than as a method of remembering stitch patterns.

This is a sampler book made of stiff card stock paper, with a plain dark brown cover and lighter brown pages. It is handmade and hand bound using green and yellow cord. The book consists of 38 sheets plus the front and back cover. Inside of the cover is a table of contents written on a long strip of paper, detailing the various stitches that are contained in the book.

There are 30 sewing samples, each demonstrating a different skill or application of a skill. The samples are bits of hand-stitching on a piece of fabric, with the fabric bound to the page. The stitches are done by hand, and demonstrate running stitches, back stitches, flannel catching stitches, etc. It is likely that a book like this was part of the owner’s school education. Many schools included classes in practical skills, and many women’s schools worked to ensure that the young ladies graduated with the necessary skills to run a household.

Until relatively recently, needlework skills were considered to be a significant part of a young woman’s education, learning both from their mothers and at school. As they gained in skills they would learn more intricate stitch counting patterns used for darning, embroidery and re-weaving fabric repairs. Sampler booklets were not uncommon in the late 19th, early 20th century and sampler books were often used for teaching children how to sew. Other types of samplers were not bound into books, but created from a single piece of fabric, demonstrating a variety of techniques. However samplers became less common as the sewing machine grew in popularity, reducing the need for fine hand sewing skills.

The original owner of this sampler was born in the Netherlands in January of 1884. She accompanied her parents to the United States when she was around 5 years old. Her father was a US citizen that returned to Holland to start a family before returning to the US in 1889. He was a stone cutter and mason, and traveled quite a bit. 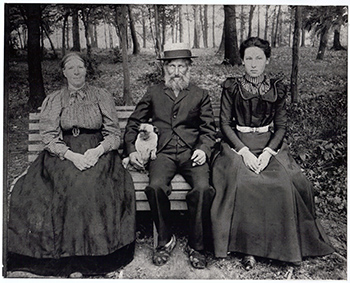 Photo provided by donor of the sampler book, sitting with her parents. This photo was likely taken around the time the sampler was made.

This particular sampler was donated by the original owner’s granddaughter. She described her as a good housekeeper, an excellent hostess, and an accomplished needleworker. Her granddaughter remembered her house as having been filled with doilies, chair covers, clothing and tea cozies which she tatted, crocheted, knitted, and sewed with a treadle sewing machine.
Object Details
Object Details
Additional Resources
Join Our Newsletter!
Get the latest news & updates about ITC.
Sign-Up Today!