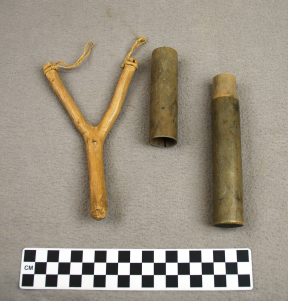 Like most boys his age Wilhelm Steubing owned a slingshot. Willie, as he was known to his family and friends was very proud of this slingshot. He carried it with him everywhere and even had it with him when he died.

Wilhelm Steubing was born in 1885 on a little farm northwest of Bexar County. His parents were German born immigrants who arrived in the US in the early 1850s, passing through what was then Indianola. He was the oldest child of Sylvester and Scholastica Steubing . Unfortunately, Willie did not make it to adulthood. While hunting birds with his slingshot one day, young Willie was bitten by a rattlesnake, and the bite would take his life.

Young Willie’s untimely death is a testament to the dangers that the early settlers of Bexar County faced on a daily basis. Texas is home to nine different kind of rattlesnakes. The snakes are categorized into two groups; one of them belonging to the genus Sistrurus and the other belonging to the genus Crotalus. For more information on rattlesnakes found in Texas, visit the Texas Parks and Wildlife website.

At the time of Willie’s death, snake bites usually resulted in death. This was because science had yet to develop a working anti-venom. Snake anti-venom would not be introduced until the 1890s. The creation of anti-venom came as a result of a flood in Vietnam. The flood pushed monocle cobras into the village and more than 30 people were bitten. Out of the 30 people who were bitten, 4 of them died as a result of the bites. A man by the name of Albert Calmette was present during the flood and decided something needed to be done in order to combat snake bites. Calmette used a technique similar to vaccination, which was also new at the time. Calmette caught snakes and “milked” them, he then injected the venom into horses which in turn created antibodies in their blood. He then drew the blood from the horses and created a serum that could be used on humans.

Today all anti-venom is essentially created in the same way. Snakes must be healthy and are kept in quarantine, the venom is milked from the snake numerous times to get a full vial. The venom is transported and injected into animals that are able to create antibodies. Due to a large amount of people being allergic to horse based anti-venom, goats and sheep are also used. When making anti-venom a veterinarian is usually present to make sure no harm comes to the animal. The total process takes about 8 to 10 weeks. The anti-venom then has to be reviewed and deemed safe to use by the FDA.

Deadly snakes bites were not the only perils settlers faced, diseases like smallpox, cholera and yellow fever were also reasons to panic. With most of the settlers like the Steubings living on small isolated farms, often miles from town or other settlers, they were also miles from medical help. The self-reliance of the settlers played a key factor in the success of Bexar County.