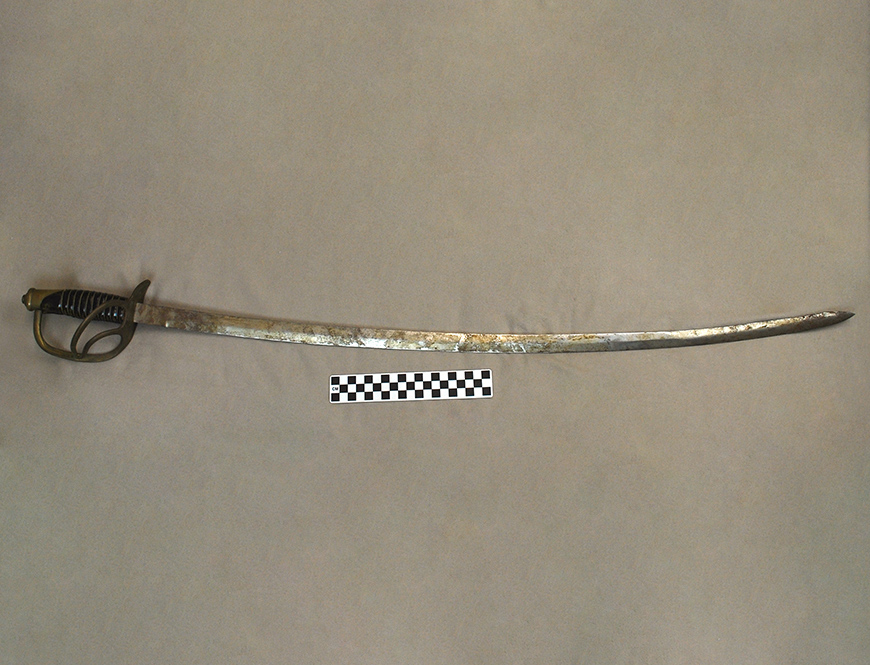 This object is a US Model 1860 Light Cavalry Saber. This model of saber was used during the American Civil War and the Indian Wars by dragoons, mounted riflemen, and cavalry regiments in the Army. Dragoons and cavalry are both soldiers who fight from atop a horse, dragoons are a lighter form of cavalry. The mounted riflemen are soldiers who have been trained to shoot guns from atop of a horse, like the Texas Rangers, and once they are in the midst of a battle they dismount from their horses.

The M1860 Light Cavalry Saber was created to replace the M1840 Heavy Cavalry Saber, which was heavier and longer, but looked exactly the same as its successor. Cavalry from both sides during the Civil War preferred the M1860 Cavalry Saber for use in battle. George Armstrong Custer used the M1860 Saber throughout his military service. Custer started his military career by graduating from West Point and joining the cavalry two months after the Civil War began. Custer was promoted several times during the war, eventually rising to the rank of Major General by the end of the war in 1865. In 1866 he was promoted again to Lieutenant Colonel and placed in command of the newly formed 7th Cavalry Regiment. The 7th Cavalry was charged with protecting settlers from the Platte River in Nebraska to the Staked Plains in Texas, and from the Missouri River to the Rockies and the railroad that crossed the area from attacks from attacks by Native American tribes living on the plains.

The last U.S. saber was issued in 1913. Today officers only carry sabers as a part of their dress uniform. During the 1920s the M1860 saber could be purchased cheaply in bulk. This has made them one of the most commonly seen types of military sabers today. They are commonly seen in Hollywood western movies, Civil War recreation battles, and given as military retirement gifts.

Saber teams also use the M1860 Cavalry Saber when they perform the Saber Arch at weddings and other ceremonies. This tradition started with the United Kingdoms Royal Navy and has carried over to multiple countries, including the United States. The saber arch is a tradition for military weddings and usually takes six people to perform but, can be done with as few as four people. The six line up into two rows with three on each side. The commander then orders them to present the sabers, in which they are to bring their sabers to their chins. After presenting the sabers the commander tells them to arch the sabers, thus creating an arch for people to walk under.