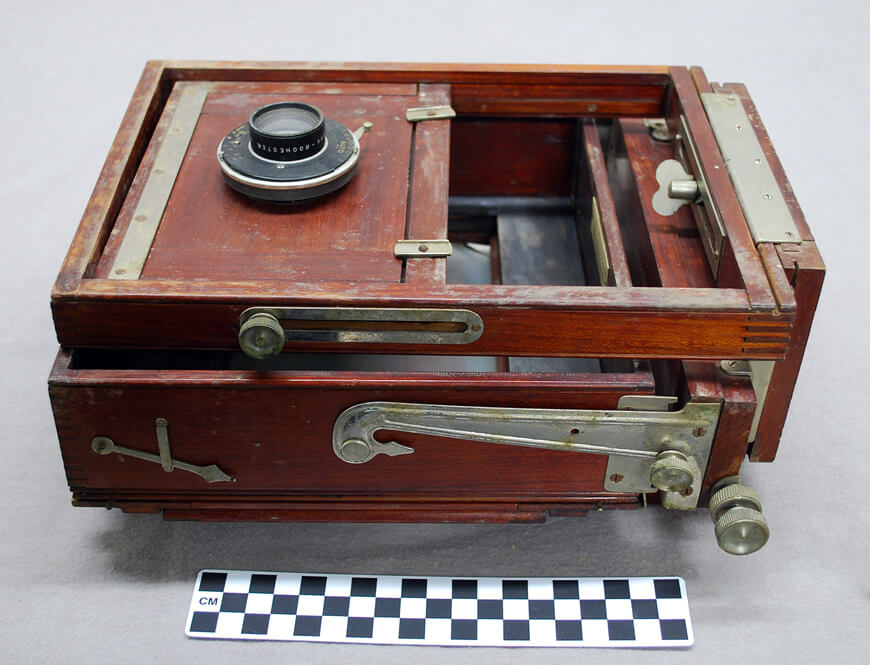 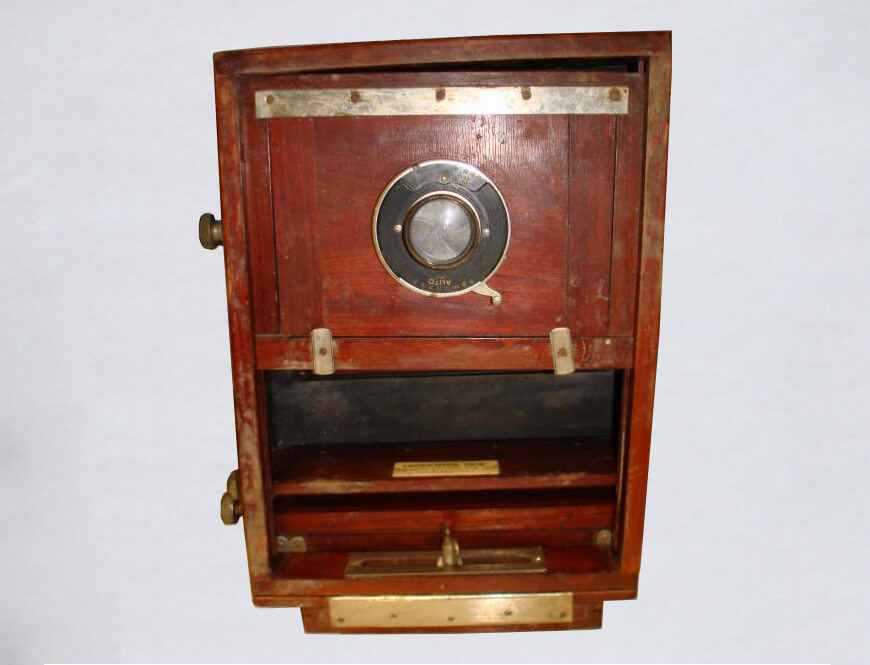 This object is a Seneca Competitor View Camera made by the Seneca Camera Manufacturing Company. The Competitor View was a part of the view camera series that the company created. View cameras are bigger and more complex to use than the roll-film cameras that were commonly used prior to digital cameras. The view camera was typically used for landscapes, architecture, and portraits. This type of camera captures the image on either an emulsion coated glass plate or sheet film. The Competitor View came in three different sizes 5 x 7, 6 ½ x 8 ½, and 8 x 10 inches.

The Seneca Camera Manufacturing Company started in 1895 and was based in Rochester, New York. The founders named the company after the Seneca-Iroquois tribe that was indigenous to the New York area. They often showed a Native American holding one of their cameras in their ads and brochures. Seneca mainly made simple cameras for the everyday person, including box cameras and folders, a folding camera.

The company did well until 1924 when it was sold to Conley Camera Company who was a subsidiary of Sears Roebuck & Company. Both the Seneca Camera Manufacturing Company and Conley Camera Company’s biggest competitor was the Kodak Company. The Kodak Company started off as the Eastman Kodak Company and founded by George Eastman who had the idea for a camera that was easier to handle when on trips when he was just 24 years old. Eastman was traveling to Santo Domingo, the capital of the Dominican Republic, and a coworker suggested that he take pictures on his trip. At the time the only camera that he could take with him was a large view camera, while looking for a camera for his trip he became fascinated with photography and wanted to make the process easier.

Prior to the late 1800s, photographs were taken using a “wet plate” system that used panes of glass coated in a special liquid to make a negative. This negative had to be “developed” into a photograph within 15 minutes or the image would be lost. The invention of a “dry plate” system for cameras meant that images could be stored for extended periods before being developed, making it easier to take photos on the go. Eastman developed a way to mass produce large quantities of “dry plates” for his cameras. The company continued to gradually advance its technology and started using film rolls in 1883 instead of glass plates. The film rolls were first used in view cameras, but the camera’s themselves started to become smaller and lighter. The first small Kodak camera was a box camera and from there it continued to get smaller and cheaper until it turned into the disposable camera of the twentieth century.